Sitting on a bench somewhere on Upper East Side, my friends and I found ourselves talking about first love. How amazing it is that most of us can’t remember what we did a week ago, but no one can forget their first love. Unfortunately my first love was the kind I too won’t be able to forget any time soon. That one fleeting moment had left a few unforgettable scars and even caused me a few pints of blood and almost an eye.  Yes, love hurts. 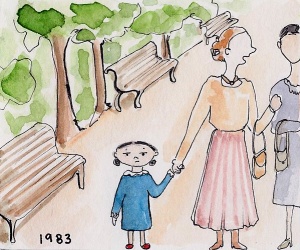 I was minding my own business, when out of a corner of my eye I saw the most beautiful little boy eating ice cream.

It is debatable if it was the boy, or the ice cream I was eyeballing, after all I was only five, but it wouldn’t be such a stretch of imagination to consider me an early bloomer. I am Georgian after all.

While I was making eyes at the boy, someone else was making his angry beady eyes at me.

A monkey  in the middle of the city? Hard to believe, no? Well, it happened.

Unfortunately for me, and not at all metaphorically – the circus was in town. Worse yet, at that point, no one has had the ‘talk’ with me explaining dangers of making eye contact with out of town animals. (this year while trying to avoid a similar situation with animals at Le Bain, this lesson came in handy.)

At first my tiny brain couldn’t comprehend what was happening.

Get As Far Away As Possible,  but it was too late.

The monkey jumped me.

Next thing I knew I was covered in iodine and bandages for weeks. And I never saw that little boy again.

But as a reward for being brave in the face of Stranger Danger, Babuta bought me tons of ice cream. Well, not tons, but as many old Soviet ice-cream cones as the mean ice cream lady would let her. 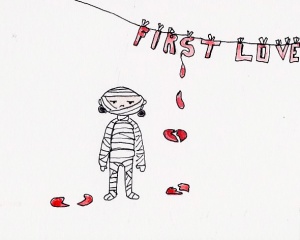