In 1984 I spent one year behind bars of a Kindergarten. To say that I hated it is an understatement. I was marginalized as one of the ‘republic’ kids and my teacher plainly hated me and made us take naps every day. I don’t mean like curled up on a mat with a pillow under your head and a blanket to cover you type of naps. I am talking about strip down to your underwear in front of everyone, change into pajamas in front of everyone, and get into your bed and sleep on command for two hours. I did everything I could to get out of those naps. I lied to my teachers about my dad having to come pick me up before nap time. I involved my mother, my grandparents, imaginary relatives. Basically I ran through the family tree before I too was shoved into the ‘nap’ room. It wasn’t the nudity I was so scared off, it was the other little overdeveloped girls (who has boobs at age of 6????) who would point at my flat chest and laugh.

It is a memory amongst many in that kindergarten that I’d rather repress, but truly I still remember vividly getting into trouble for defending myself, for beating up the kid who beat up my sister and so on. I spent most of the time standing in the corner.

One day I noticed a boy in the class parallel to mine. We had grades like A and B. I was in A and he was in B. Don’t know why I never noticed him before, but one day he leaned over his desk and asked me if I had a spare pencil. He had the prettiest blue eyes. The next thing I knew we were partnered up to be the couple representing the Georgian Republic in the spring time festival which showcased the fifteen republics that made up the Glorious Soviet Union. The big boobied girls were all blond so they got to be the Slavic republics, but not one of them had a partner as pretty as mine. 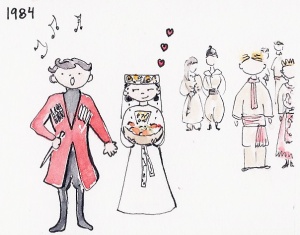 He sang beautifully, and for my part, my mom stayed up (albeit begrudgingly) all night to sew my costume the night before the showcase. I forgot to mention it to her earlier. My bad. What did I know, I thought dresses grew on trees. Come to think of it, I think that’s when I heard my first curse word spoken over a sewing machine.

Anyway, there I was mooning over this kid and reciting my part of the presentation (more like humiliation) 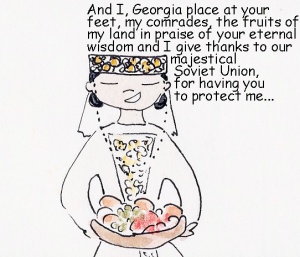 when I realized just what I was saying….

Love had blinded me to the injustice of the whole situation. There I was, desirable goodies (food that is) in hand, and not only was I handing them over to my enemy (teacher) I was thanking him for taking them off my hands! This was wrong! 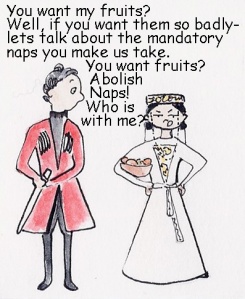 I thought I had a good solid argument, and a reasonable demand.

But in politics the wind blows in all sorts of directions…. In just a few minutes my reasonable argument and I were relegated to an all familiar corner.

Stupid boy with stupid blue eyes. Heart broken and humiliated I stood by myself, too angry to cry, too sad to pity myself.

But then something strange happened. I heard shuffling of feet getting closer and closer until they stopped. I was speechless (for a change). Apparently my arguments struck a cord with someone I never expected to have anything in common with. The big boobied girls were sick of humiliating naps too. 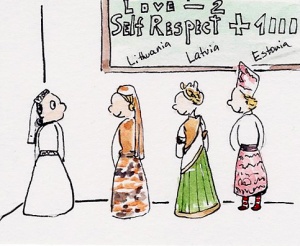 Eventually our rebellion was crushed by the Dictator that was the Kindergarten principal, but still, we had made an impression and were allowed to change our clothes in privacy of a bathroom. Not bad for a kindergarten radical.

As for the boy, I can’t even remember his name.